Welcome to HHH Cattle, where triplets Lennox, Hendrixx and Fenixx Hott navigate their way through the minefield of love.

The sassy, southern stunner, grew up on the Triple H, the daughter of of his father’s oldest friend and HHH employee. His parents took her in when, at the age of fourteen, she lost her only living relative, essentially becoming part of the Hott family.

The only problem was, Hendrixx didn’t see Blake that way. Unlike his brothers, Blake didn’t feel like a sister to him. Nope, he had a whole lot of other feelings floating around for her.

And a serious case of wanting.

Blake lived and loved the land just as much as he did, she had a soft and gentle way with horses, and a special gift to heal broken animals. There wasn’t much he didn’t love about Blake – and there wasn’t anything he wouldn’t do for her.

All he had to do was figure out how to tell her without ruining a lifetime of friendship. It had to be done.

A life without Blake by his side was a life he didn’t want to live. But once Hendrixx lasso’s his cowgirl, his problems get a whole lot bigger. Loving Blake and keeping her safe just might be his undoing.

USA Today Bestselling Author, Everly Frost is pleased to present the cover of her upcoming release, This Dark Wolf!

Check out the stunning cover and blurb below! Also, get to know the author with Everly’s bio and social media links.

And last but not least, enter for a chance to win some wolfy prizes and a $5 Amazon gift card! 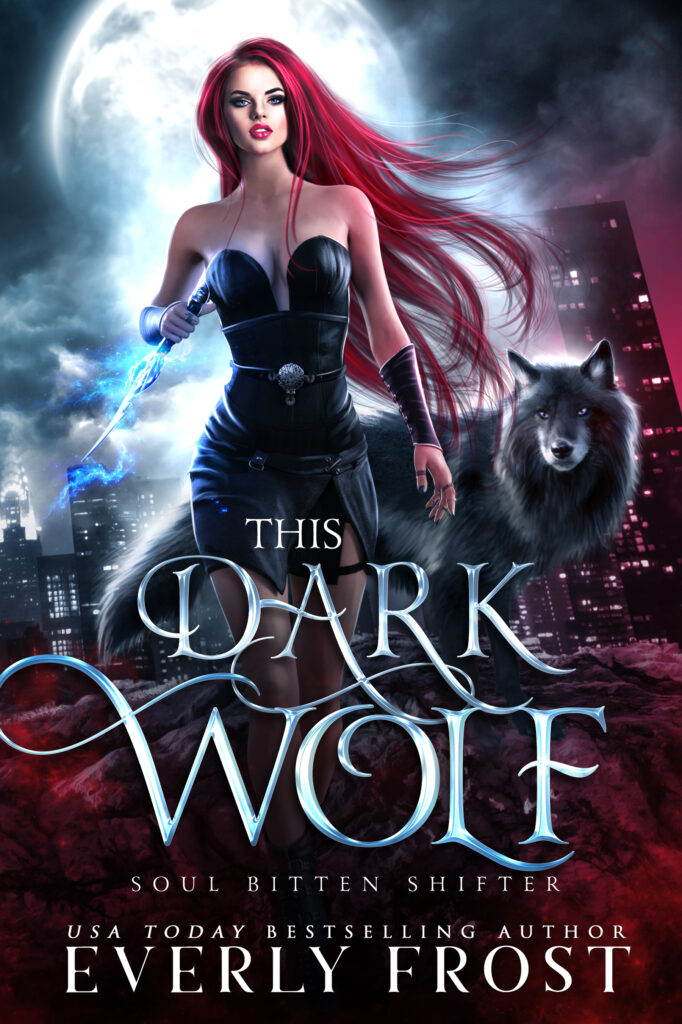 I am a wolf shifter born with a human soul.
Packless. Mateless. Unable to bond.

Cast out of my pack, I live in a supernatural safe house filled with broken women. Other women come and go, but I remain.
I’m waiting.
For him.
Tristan Masters—the ruthless alpha of the most vicious pack in the city.

He fought for my life when my pack wanted to kill me. He saved me. I should be able to trust him.
But I know better.

Tristan Masters wants my wolf; my killer soul. When he’s ready, he will use me to destroy his enemies.
Tristan thinks he owns me. He thinks there are no consequences because I can’t bond to him. He’s going to discover that I am nobody’s to command.

This dark wolf will bite back.

This Dark Wolf is an urban fantasy romance. Full length. 17+ for heat level and language.

You can get your copy here: 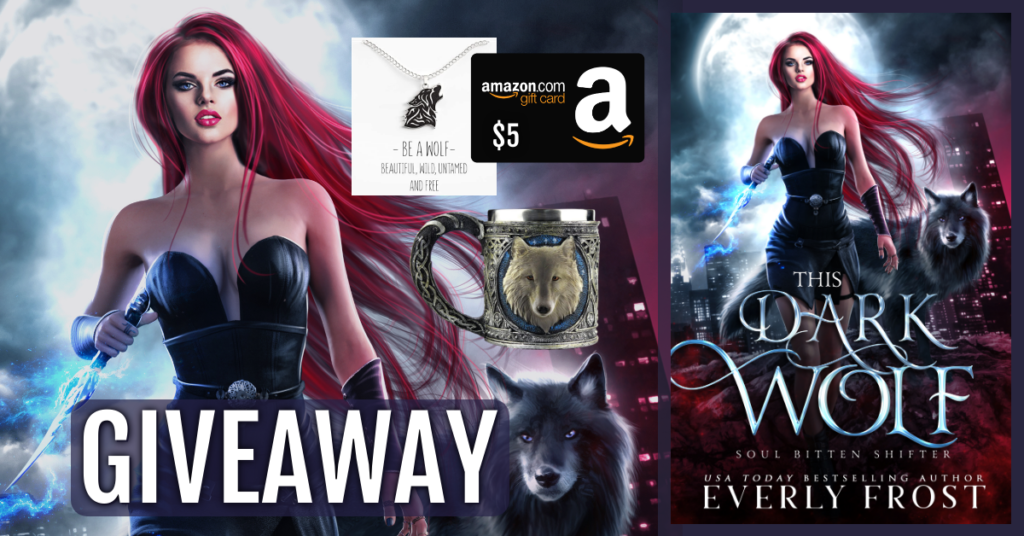 Stalk Everly Frost for a chance to win this amazing wolfy prize pack!

Prizes include a 3-d ceramic wolf mug, a wolf necklace, and a $5 Amazon gift card!

Get points for everywhere you follow Everly and bonus points for sharing about the book on your social media!

Plus, there are several other ways you can enter, including some daily tasks!

He sent me away to be killed.

But I outsmarted him, and now his allies are mine.

It’s time to claim my rightful place as head of the crime family.

But his closest associates stand in my way.

Try and take it from me…

Enter for a chance to win $10 Amazon Gift Card & an e-copy of Mine, Forever

Amazon Bestselling Author Kate grew up in Western Sydney, Australia, hoping to one day have a pet dragon and castle to roam around in. Then the Khaleesi stole her life and she was forced to reinvent herself.

When she’s not writing, she’s spending time with her boyfriend and their zoo of pets that include snakes, a tarantula, bearded dragons, blue tongue skinks, a cunningham’s skink, scorpions, turtle, axolotl and 2 noisy cockatiels.

Book 4 in the Craving Crimson series

I’m not who I once was. There comes a time in everyone’s life when they have to make a tough decision.
A decision that changed everything.
I didn’t expect I would become broken…

Broken.
That’s all I am. Things have changed, and not for the better. The war is here, but I’d all but given up on my life of hunting until I’m pulled back into the thick of it.
Just when I think I’ve escaped from it all, I see everything I had ever hoped for is lost.

As the war between the supernatural species wages on, can two star crossed lovers find their way back to each other?

Book 1 is just 99c or free with KU subscription: https://amzn.to/2IhAxjw

Xavier is one of the only true Hunters left in New York. He doesn’t cave under the pressures of the newly appointed Government task force to eradicate the “problem” they had with Nosferatu’s feeding on the humans just like the others did. Xavier wasn’t fooled by their idea to “help” the Nosferatu blend in – he knew it was highly unlikely the bloodthirsty animals would curb their taste for fresh, hot blood.

When the woman who killed his father and brother ten years ago arrives back in town – he sees red, vowing to end her once and for all….

Soleil has secrets – too many secrets, one in particular had haunted her since the day she’d made the promise to keep it. But the time had come to end her existence, she’d tell Xavier the truth about his family and allow him to kill her. Only…first, she needed to get him to trust her enough to tell him the truth.

Just as she is about to unload, her dark and dangerous past comes back to haunt her – this time, it would take more than a trick to ensnare her enemy and take him out for good – can she enlist Xavier to help her to ensure the world doesn’t fall into the hands of an egomaniacal immortal hellbent on using the humans as his slaves.

Kate grew up in Western Sydney, Australia, hoping to one day have a pet dragon and castle to roam around in. Then the Khaleesi stole her life and she was forced to reinvent herself.

When she’s not writing, she’s spending time with her boyfriend and their zoo of pets that include snakes, spiders, lizards, gecko, an axolotl and a bird.